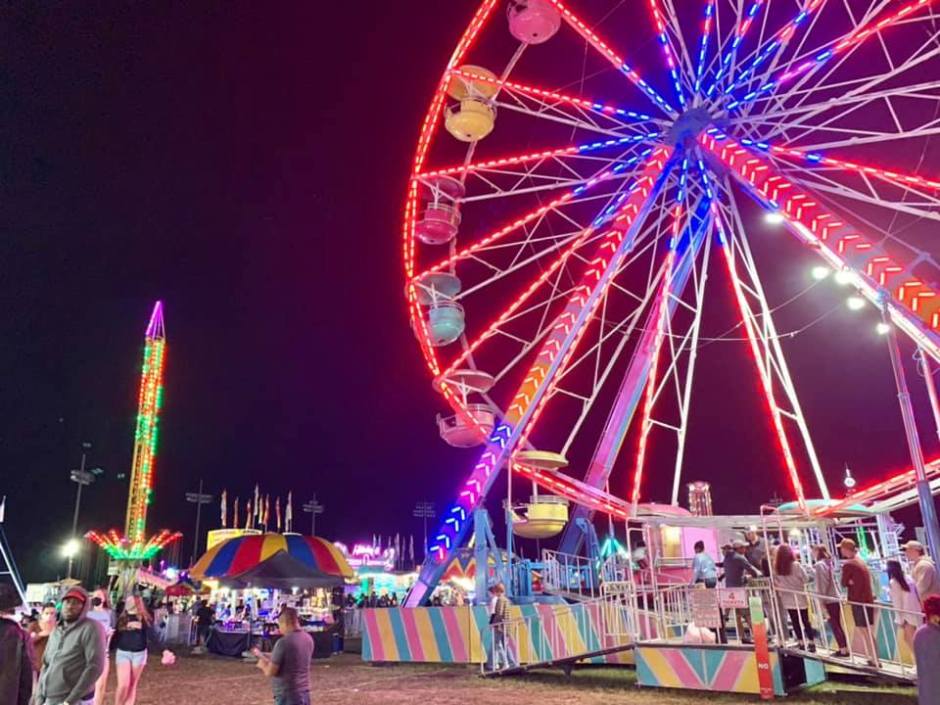 As a child, the fair I grew up with felt magical and gigantic. We all looked forward to the turning of the fall leaves and the opening of the Bloomsburg Fair! I feared the shuttle tram that never completely stopped when you were trying to get on and off. My sister and I were warned of our ultimate demise if we were ever to trust the rides at the fair (“if they have wheels, don’t get on them”) my parents always said. Our family generally went to the fair to eat and to shop. I don’t think we ever went to a concert or performance at the fair. Although my childhood fair tended to have the traditional vendors year after year, there was always something new and innovative at the fair.

I distinctly remember falling in love with a cheap, glass swan filled with food colored water and “feathers” that spewed out – that was the most glamorous thing I ever owned. We loved the pizza, funnel cakes and I’m convinced it’s the only decent place in the world to get an Orange-Aid. (if you don’t know what that is, you need to go to my childhood fair). When this year rolled around and my mom mentioned it – I suddenly felt a little nostalgic and regretful that I didn’t plan my fall trip home to include the fair week. A few years ago here in Alabama, I went to a “fair” – it was essentially a parking lot with 3 vendor stands. I was hesitant to trust trying other ones, but after a quick Google search I discovered the Alabama State Fair had one weekend left! It felt a little too coincidental, and I knew I’d have to go.

Even just arriving felt like “my” fair; it was held on the Birmingham Race Course (nope, not cars – greyhounds!) A shuttle wasn’t necessary because parking was pretty close and I got there just as the sun was starting to set (perfect). Getting tickets and going through security was easy (although a new step that was different from my childhood days).  As soon as I looked up and saw the lights on the rides and vendor trucks, heard the roller coaster screams and smelled that perfect mix of manure and food – it was like being home again!

They had the typical fair farm animals (although more for recreation and petting zoo than for contests). They had a giraffe and white tigers which wasn’t anything I haven’t seen in much closer detail than via a fair fence (that’s another story). As I’ve gotten older my feelings and thoughts on exotics at fairs and circuses have changed, but it was what I would expect to see at a fair – there has to be something exotic. I walked around to get a better idea of what food was available and there was no shortage of options. Every step I took up the midway resulted in stuck shoes – it wasn’t clear if it was mud or something else that you were walking through – but it felt about right to me. After all, who comes to a fair to complain about walking through mud?

Then I broke the sacred rule: I bought ride tickets. Anything that goes upside down has been on my “um, no” list since Las Vegas circa 2012 (freaking New York, New York roller coaster), but I digress. My first ride had to be the ferris wheel (because I needed pictures for this article and I am dedicated to my craft!). Even though it is a high in height ride, it doesn’t move fast and the cars were completely enclosed – I got in line and didn’t hesitate despite my insane fear of heights. I remember getting in and out of ferris wheel cars being MUCH easier when you are younger, those are some high steps!

Sitting in my car, slowly moving up so that the attendant can seat the other riders, I started to look around and see which sides would give me better pictures (I was determined to get some nice shots for this article!). When they moved me up a little further I started to not love it so much. It had been a long time since I’d done this and I knew I’d be a little freaked out – that’s why I made myself do it! I managed to calm down, take a video, pictures and even “let go” of the bar so I could enjoy the ride – it was really awesome.

The Pirate Ship was the next one I waited for, which reminded me so much of a similar ride at the amusement park near where I grew up (where our parents LET us ride the rides). It was one of my favorites to ride with my Dad who passed away last year. Standing in line – my old instincts kicked in – you know how you do the math to see if you’ll board the next ride, and if you’ll be able to run to your desired seat before the people in front of you figure it out. Let’s just say, I haven’t lost my skills. I easily got the very end seat (along with some pretty scared  younger gals) – that thing went a LOT higher than it looked. I literally flew up and down in the seat (it was like being 10 years old again!)

The Himalaya seemed pretty basic after all that, but it’s a staple ride that I always go on – one of the “safer” ones at the fair. I have to tell you though, maybe it’s because I’m older, but the rides sure seemed to go pretty fast at the Alabama State Fair. The “fad” at this state fair seemed to be LED balloons and face masks (yeah, it’s definitely 2021). It did make me long for the colored feathers that I used to always buy and stick in my hair at the end of the day. The sights, the sounds, the smells – it all felt the same, kind of like all those other years didn’t happen yet. That’s the magic of the fair.

After a $12 cheesesteak (which was really, really good), I bought some cotton candy and a funnel cake to take home. The parking lot was an adventure too – no lights – and about 10 min of me walking down the wrong row with food in hand, but I wasn’t the only one. I remember coming and going to the fair to be a much bigger deal/hassle as a kid than when you are an adult. Maybe it’s because I had control over when I left and how, but it was just something interesting  I noticed.  Going from being a teenager in the fair to a responsible adult outside reminded me of my age a little – but it was definitely a fair to remember.